Flying Disc
Ingo Maurer und Team 2016
Flying Disc is an extremely light-weight object for indirect lighting. Attached with thin wires, it seems to hover below the ceiling. Suspended from only three wires, it is meant to be installed with a certain angle, to add dynamics to the space. The thin white disc is lit up by a ring of high quality LEDs, diffusing the light. A long slender black rod holds the LED ring below the disc. Both length of the rod and the angle of the ring are adjustable, so that it is possible to light up the diffuser disc asymmetrically. All three parts, the disc, the rod and the ring visually merge to an intriguing graphical object. Materials: Glasfibre, carbon fiber, metal, plastic.
Light source
LED, 2700 K, 3520 lm, CRI 95, 25 W, EEC G (A-G. With built-in LEDs. The light source is not exchangeable by the user, but by an electrician.
Technical data
For 220 - 240 or 100 - 130 volts. Dimmable.
Dimensions
Diameter 1,90 m
More info
First produced in autumn 2016. The new version, which will be manufactured from January 2021, is equipped with LEDs that have a light colour of 2700 K. The predecessor model has 3000 K. 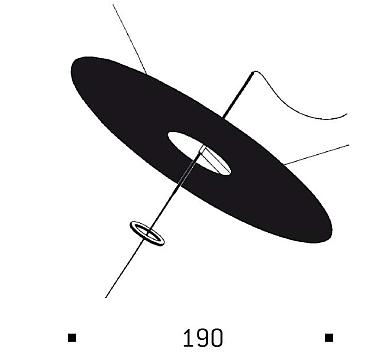 Flying Disc is based on the​ floor lamp Ringelpiez, which Ingo Maurer first presented at light+building, Frankfurt in March 2016. Two prototypes of the suspended object were presented in Milan at ​San Paolo Converso, a former church which is now used for exhibitions. Five Flying Disc were installed at ​​​Hotel Unique Sao Paulo​ in 2016.

In 2018 two Flying Disc were suspended the entrance area of ​Design Post Cologne.