Spyre
Ron Arad für Ingo Maurer, 2016
Steel, aluminium, plastics mat white lacquered. The Spyre is a unique luminaire, designed by Ron Arad for Ingo Maurer, and limited to 50 numbered pieces. The concept is derived and influenced from a larger Spyre sculpture. The fixture is made of five segments which can be rotated and adjusted to direct the light. It is fitted with a warm LED technology and an integrated On/Off sensor.
Light source
LED, 6,5 W, 355 lm, 2700 K, CRI > 90 Ra, EEC A+. With built-in LEDs. The light source is not exchangeable by the user, but by an electrician.
Technical data
For 100-250 volts, secondary 9 volts
Dimensions
Height approx. 100 cm, Ø base 9 cm.
More info
3D-printed. Each segment rotates almost 360°. Not dimmable. 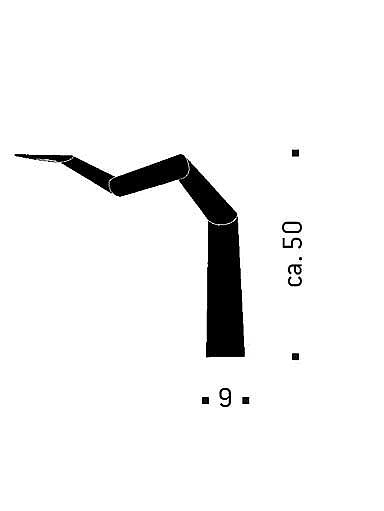 “The Spyre started when I had to do a piece for a site in a city where the sculpture would be seen from almost everywhere because it is tall and spire-like, but I also wanted the sculpture to enjoy its position and see the city all around it, so the result was an articulated spire with a camera at the tip. In the section between each segment was a perfect tilted circle – because the circles are tilted the vertical section of the columns become oval. All this means that there's always a continuous flowing, uninterrupted volume from base to tip regardless of the acrobatic movement created by four motors, each at different speed. The fact that each 'elbow' is moving at a different speed means that the Spyre never ever looks the same. Later, it was decided that the best place for the Spyre to be displayed would not be in a place that enjoyed city views, but on the contrary, locked in a courtyard – again the sculpture will be viewed, but the sculpture will have a lot to see – the walls of the courtyard, the movement of people, etc – it won't be bored...

In the process of developing the Spyre we made some scale models in the studio using magnets in the joints – 'they would make great desk lights – let's do some. No, let's not, we'll ask Ingo to do it. He knows so much more about lights than us'. Luckily Ingo's response was immediately enthusiastic. We exchanged geometries with Ingo and his team, and we had a meeting in Milan where we saw a very impressive proto-type of the light. It's great that Ingo kept the magnet connections, and great that there's a nice warm light that can be pointed anywhere, upwards, on itself etc.

The sculpture doesn't 'see' now, but it throws light on things. Funny thing is, the first two are being shipped to the Royal Academy for the Summer Exhibition and they will be less than 100 metres away from the big one.”